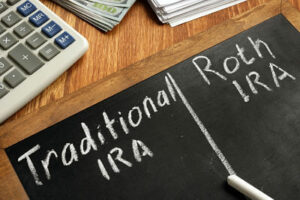 Traditional and Roth. These are the two main types of IRAs that you can open or facilitate via rollovers and transfers. Let’s take a look at what they do and which might be the best choice for you.

Individual Retirement Accounts are an outgrowth of the Employee Retirement Income Security Act (ERISA) of 1974. As pensions began to decline as a common benefit, lawmakers saw the need for individuals to have a way to plan for their retirement. Thus the IRA was born.  How do they work? You can deposit a portion of your income – in 2019 the number is up to $6,000 or $7,000 if you are over age 50 – in an IRA and receive a tax benefit from that.

Traditional or Roth: Which is Best?

So you’ve got the choice between a traditional IRA and the Roth IRA. Not to nerd out, but for a little context, the Roth IRA was unveiled in 1997 and is named for its congressional sponsor, William Roth.

Here are a few key rules to keep in mind with the Roth IRA:

With a traditional IRA, you are contributing and then using that amount as a tax dedication in the current tax year. That money then grows tax-deferred. When you take that money out it is all 100% taxable.

A few key rules to keep in mind with the traditional IRA:

When you roll over a 401K, a 403B, or a 457 account, these are typically rolling into a traditional IRA, although it is possible to roll over into a Roth IRA.

Which One is Right for You?

In general, Roth IRAs offer more flexibility. There is no RMD and early withdrawal rules are more flexible.

Investopedia shares some income-eligibility restrictions to be aware of when it comes time to prepare your taxes:

One big consideration in choosing between traditional and Roth IRAs is what does your future look like? How is your income tax bracket likely to change in the future? Will it be more advantageous to defer taxes or pay them now? There is some guesswork here, but it is a question worth considering.

So there you have it. If the tax burden now is less of a concern to you, you might want to consider a Roth IRA, where the taxing is done upfront. If you want to reduce your taxable income now, a traditional IRA might be the better choice. But understanding the differences and advantages to both, you can make the right decision for you.